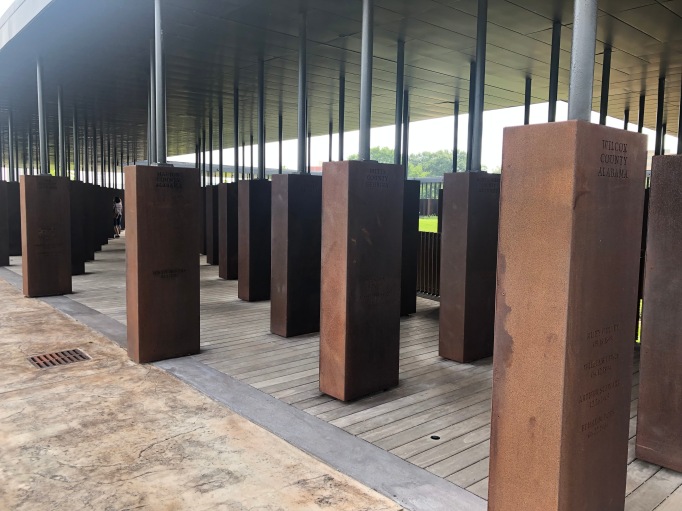 In the Memorial to Peace and Justice in Montgomery, AL. Each steel memorial lists names of people who were lynched, organized by state and county.

We were visiting Pat’s brother in Tennessee last week as part of a Habitat for Humanity project and decided to extend our trip to see some of the historic sites of the American Civil Rights movement in neighboring Alabama.

Our guide was a relatively new, interactive website, the Civil Rights Trail. If you go to that site — https://civilrightstrail.com— you can click on individual states and key Civil Rights

cities in the south.

Because we were visiting in Knoxville, and our time was limited, we selected the closest and most-compelling sites just below the border in Alabama. We spent a day in Birmingham, traveled through Selma to Montgomery, and then spent two days in Montgomery before flying home via Atlanta (which has its own significant history from the Civil Rights period.)

Although Birmingham and Montgomery are about the same size, they are very different cities. Birmingham wasn’t founded until after the Civil War, and it became a powerhouse of railroading, mining and industry. It had a strong African-American middle class, and the downtown area still includes the parts of town where African Americans lived – separate and unequal – before the riots and bombings of the 1960’s. 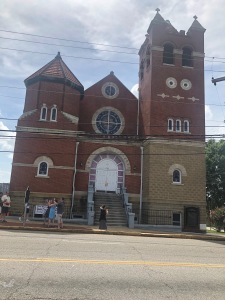 Our first stop was the Birmingham Civil Rights Institute, which tells the story of the city and its residents’ long period of dealing with racial segregation. Directly across the street is the 16thStreet Baptist Church, where four little girls were killed in a 1963 bombing.

And just across 16thStreet is Kelly Ingram Park, where Police Commissioner Bull Connor use dogs and firehouses on protesters — and which now contains interpretive sites about the movement. Unfortunately, it was difficult to focus on the history here because of the number of folks who approached us soliciting money for gas, or food, or to help a charity.  We escaped to follow the path of the march from the church to the City Hall where Martin Luther King, Jr. wrote the famous letter to the Birmingham jail.

Pat is about to walk across the Edmond Pettus Bridge, beginning spot for the march from Selma to Montgomery.

We drove on to Selma, about two hours away, and Pat walked across the Edmond Pettus Bridge, scene of the 1965 Bloody Sunday riots, where

marchers for voting rights began their four-day trek to the Capitol in Montgomery 50 miles away.  On the route to Montgomery we passed markers indicating the sights where marchers camped.

Montgomery houses the state capitol and an impressive array of government buildings. Much older than Birmingham, Montgomery was a major port during the slave trade, rivaling Charleston, S.C. as an importer of African slaves. The downtown area contains the sites of at least four slave markets from the period.

Montgomery is well-known as the home of Rosa Parks and the bus boycott which led to integration of Montgomery’s transit system. It was also a scene of the 1960’s freedom riders, who were attempting to integrate the interstate bus

But the amazing addition to Montgomery – at least for Pat and me – was the new Monument for Peace and Justice – the so-called “lynching museum,” a sobering reminder of the terror imposed on black people well into the 20thCentury.

The monument includes what are essentially tombstones – organized by county and state – representing the thousands who were lynched for crimes such as attempting to register to vote. Each county is invited to claim their monument in an attempt to keep the legacy of this terrible time alive 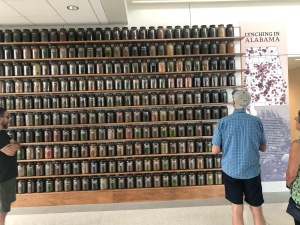 Jars containing earth from the site of lynchings throughout the south

The Legacy Museum, associated with the Peace and Justice Memorial, tells much of the history of slavery, of the many Supreme Court decisions that kept it in place, and of the various kinds of suffering imposed in the Jim Crow South. It is a project of the Equal Justice Initiative, founded by Bryan Stevenson, whose book,Just Mercy, tells his own story about becoming a lawyer dedicated to freeing many wrongly imprisoned men and women – still part of the continuing history of unequal treatment and discrimination.

This trip was a powerful sobering experience and a reminder that grave human injustice is a part of our history and continues today.