L’isle sur la Sorgue, where we are staying, is a handy jumping-off point to see the hill towns of the Luberon – a significant recreational area for the natives and one made popular with Americans and the British by Peter Mayle in “A Year in Provence” and his subsequent other books, movie and TV series. The book is a real treat; I have not seen the TV show, but a BBC critic referred to it as the worst television show ever made. 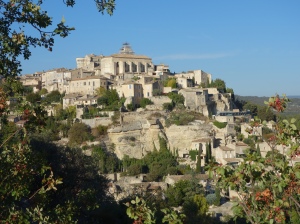 Gordes is home to the rich and famous.

That’s not true of the experience. We have had a very good time exploring these medieval towns, built on hills and often fortified. Many are now very fashionable, and not only because of Peter Mayle.

Nearby Gordes, a beautiful example, is now dotted by chateaux and swimming pools of the rich and famous. Lacoste’s (now ruined) 42-room chateau was once the home of the Marquis to Sade and now is owned by Pierre Cardin. The Savannah School of Design has a campus here. It is not the home of the shirts, however.

Roussillon is built on ocher cliffs and was the center of ocher production.

Pat and I began going to hill towns on one of our first trips to Europe – more than 30 years ago. The first I remember is the town of Eze, high above the Mediterranean, on the corniches between Monaco and Nice. I think Pat still has a scarf she bought there in an early indulgence. It is near where Princess Grace was killed in a car accident.

One of our best trips ever was a few years ago to the hill towns in Tuscany – we stayed within driving distance of Montepulciano, Montalcino, Orvieto. There are more substantial towns, but like the others, perched way up long, winding roads with thick walls that could be defended against outsiders.

A couple of years ago, we traveled through the white hill towns of Southern Spain, on the way to

Seville. So we know our hill towns.

A common thread is the need of a rental car, as many of these are off the main roads. Of course we see plenty of tour buses, so there is probably another way to do this, but we have enjoyed the freedom of a rental car, despite the occasional inconvenience of having the find a place to park it, as many of the city centers are closed to vehicle traffic. Also, we have done our traveling in the fall or spring. I understand that many of these places get pretty jammed in the summer. Even now, we had trouble getting reservations for a tour near Cassis, and Charlie found it difficult to get a train reservation back to Paris from Avignon. 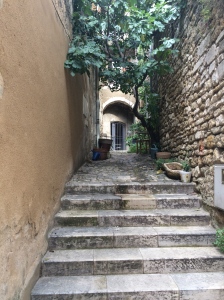 And the stairs you climb to reach it.

In any case, we have really enjoyed seeing these old towns, which I guess are similar enough, but each different in its own way – interesting residents or an old church or natural formation. On this trip, Pat is carrying an iPhone which has an app that counts her footsteps: 10,000 is not an issue – and 15,000 is normal. All uphill.

One more note about L’Isle sur la Sorgue. Avid readers of this blog (both of you,) will recall that I said the Thursday market wasn’t much to write home about. That’s not true on Sunday. It has the reputation of being the largest antique market in France. I do not know how to judge that, but the streets are full of all kinds of stalls, foods, clothing, various household items, and the side streets and antique shops all are open. Even in mid-October, it was a very busy place and clearly worth the wait. 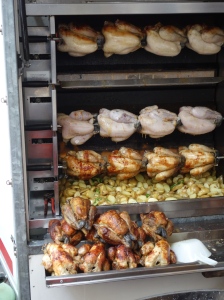 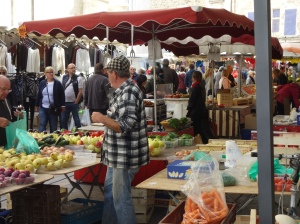 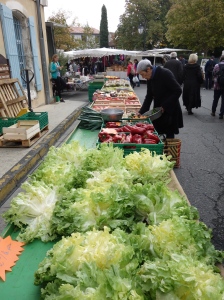 Scenes from the Sunday market in L’isle sur la Sorgue.

3 thoughts on “We’re with hill”