We actually had left the Black Sea towns of Varna and Nesebar, and were on our way inland on the next leg of our tour of Bulgaria, when our tour guide, Stefan, complained specifically about organized crime.

Gotta be a cocktail lounge around here somewhere.

A new Porsche was in the road holding up the tour bus while the owner was doing business in some shop and Stefan said that was an example of the group which reportedly had been dominating these Black Sea ports since the fall of communism in 1989-90.

I had long been interested in the cities on the Black Sea, and getting a chance to visit them was a big part of the reason for this tour of Bulgaria in the first place. Like so much of this region, they have been influenced over the millennia by invaders from Central Asia, contrapuntal dominance by the Russian, Byzantine and Ottoman Empires, the role of Greece and its predecessor in Thrace. Most recently, they are known as the playground of rich Russians, as well as sun seekers from Britain, Germany and Scandinavia.

Stefan, who is half tour guide and half Bulgarian nationalist, has mostly confirmed those rumors, although the role of the European Union reportedly has lessened significantly the influence of crime in the area. Apparently it is difficult both to operate a criminal enterprise and launder money, and abide by the EU’s strict rules. So the same rules that are annoying the Brits and Dutch because of their inflexibility are apparently a help to Bulgarians. 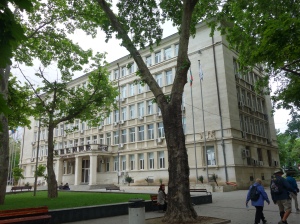 In some ways traveling here feels a little like we have been transported back to the 1970’s. Besides the concrete communist-era buildings, tourism is not a slick or modern as we see in the U.S. or Western Europe. Many fur shops are visible in the shopping areas. We, as Americans are a bit of a spectacle with school children wanting to greet us with “hello”, “hi” sometimes ciao. 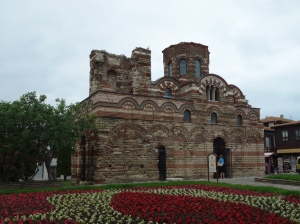 Our first seaside stop was Nesebar. Much of the city consists of new hotels and condos that cater to vacationers from Russia and other northern areas. We avoided the new development called “Sunnybeach” and stayed on the island – now connected by a causeway – that has been a settlement for centuries. Half seaside vacation area and half historical antiquities, built over Roman ruins, this little island includes 14th, 15th, and 16th Century Orthodox churches, traditional 19th and 20th Century Bulgarian domestic architecture, seafood restaurants and tourist shops.

Next stop was Varna, up the coast about an hour. Varna has been

a major economic, social and cultural center for 3,000 years. Most recently a stop for cruise ships but now, because of the unrest in Greece and Turkey, cruise ships no longer dock. Beginning as a Thracian seaport settlement, it now is the third largest city in Bulgaria, home to the navy, a major seaport, with a beautiful stock of 19th and 20th Century mansions – in various states of disrepair and renovation – and a wonderful, 5 km-long park along the seaside.

Clearly there are elements of the communist past: One of the ugliest hotels in existence, a concrete monstrosity for a city hall. Nothing unusual there. We’ve seen communist dreck alongside wonderful buildings from the 19th Century Austro-Hungarian style and 20th Century Art Deco and Art Nouveau periods. If it takes the mob to use their ill-gotten wealth to restore the buildings, maybe that’s the price of doing business.

We had a glass of wine in a bar on the beach, exceeded by 40 percent our 10,000 steps on Fitbit, but saw no apparent Russians. Maybe they were in a nicer hotel.

One thought on “On the Black Sea, looking for Ivan”